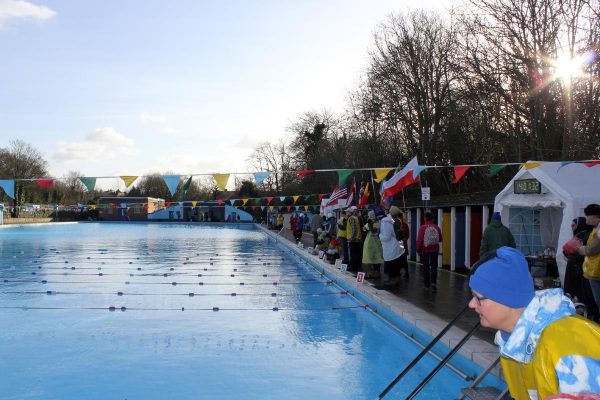 For the last 4 events in a row we have been part of this unique cold water swimming event at Tooting Bec Lido in London. The event takes place every second year in January in this large open water lido – unheated pool. The size of the pool is 100 by 30 yards or 92 by 27 metres and it is considered to be the largest open lido in England.

The Cold Water Swimming Championships started at Tooting back in 2006 after South London Club members attended the well established event in Finland in January 2005. The event now alternates by year with the World Cold Water Swimming Events and it works well for those who visit both.

We, Strel Swimming, have been part of all years since 2011 and have seen a massive growth in people participating in the event. The popularity of outdoor swimming is growing and the fact that the event is very well organised means that people are keen to return. Most recent years have seen numbers of participants between 600-800 and a similar number of spectators. So quite a crowd packed around the pool! Cold or warm, all having a great day out!

We proudly sponsor the Tooting Bec championships and great prizes were donated to the winners of the raffle. This last event we donated our great swimming trip to Montenegro for one person.

The event also attracts a good media attention and great pictures and videos are taken.  Part of the recent competition was the Best Hat of 2017 and there were some really innovative hats out there.

At the end have a look at this great “I LIKE TOOTING” song performed back in January 2015.  “Some say LEEDO, some say LIDO!”

We look forward to coming back! See you in January 2019!

Stay in the loop